Frothy Monkey is 1416 on the Inc. 5000 list of America’s Fastest Growing Companies

Frothy Monkey is 1416 on the Inc. 5000 list of America’s Fastest Growing Companies

Thank you to all of the #FrothyFaces who make it possible for us to take chances + GROW.

From a 1200 sq ft coffeehouse to one of America’s fastest growing companies.

In 2004, Frothy Monkey opened in a 1200 square foot bungalow in the transitional 12South neighborhood. A year and a half later, current majority owner and visionary Ryan Pruitt, joined the local coffeehouse’s staff, eventually becoming General Manager. Ryan’s vision for Frothy Monkey’s success and growth inspired him to purchase the company in 2011 with a small group of partners.

Since the ownership change, Frothy Monkey’s growth has exploded, expanding to include three full service restaurant locations in Nashville and Franklin, a coffeehouse at Grimey’s Too / Howlin Books, and a BAKERY in East Nashville.  In 2014 coffee sales had reached a volume that justified bringing coffee roasting in-house.  Frothy Monkey Roasting Co. opened it’s Nashville based operation at the INK Building in the spring of 2015 after spending the prior year roasting at a partner facility in St. Louis.

The current partnership group lead by Ryan Pruitt includes locals, Rich May, Chef Chase Ingalls, Jeff Gibbs, Jennifer Sheets and Heather Southerland. “Each of my partners was strategically chosen for their unique skills and strengths,” states Pruitt. “Each plays direct roles in the success and growth of the company.”

The future of the American coffeehouse.

Despite all of the growth, Frothy Monkey is still a neighborhood concept. Pruitt’s vision of the future of the American Coffeehouse is this- come to Frothy Monkey expecting great coffee, and discover that you can enjoy breakfast through dinner, a glass of wine or a pint in a creative and approachable atmosphere. Though the customer demographic varies in each neighborhood they inhabit, there is a common thread of quality, local/regional food and beverage relationships, accessibility to customers, and the comfort of a traditional coffeehouse with an expanded menu of offerings from morning through the day and into the evening. As Frothy Monkey continues to grow, the intent is to invest in areas where they can be a contributing neighbor.
About Inc. 5000

In 1982, Inc. introduced the Inc. 500 list of the fastest-growing privately held companies in the United States. Since then, this prestigious list of the nation’s most successful private companies has become the hallmark of entrepreneurial success and the place where future household names first make their mark. Pandora, 7 Eleven, Toys ‘R’ Us, Zipcar, Zappos.com and numerous other well-known brands have been honored by the Inc. 5000. In 2007, the Inc. 500 list expanded to the Inc. 5000, giving readers a deeper, richer understanding of the entrepreneurial landscape and capturing a broader spectrum of success. The Inc. 5000 ranks companies by overall revenue growth over a three-year period. inc.com
About Frothy Monkey

Frothy Monkey has been a staple in the Nashville community since 2004. The chef driven menu offers breakfast, brunch every day, kids menu, lunch + dinner with expanded beverage offerings including coffeehouse standards as well as craft beer, wine + cocktails. They deliver quality, creativity, and approachability in everything served. Locations include 12th Avenue South, 8th Avenue South at Grimey’s Too, and 5th Avenue North in Nashville, TN as well as in Downtown Franklin, TN. Frothy Monkey Roasting Company is located at 613 Ewing Ave in Nashville. BAKERY by frothy monkey is in East Nashville. Visit www.frothymonkey.com for more details. twitter + instagram: @frothymonkey  facebook: fb.com/frothymonkey 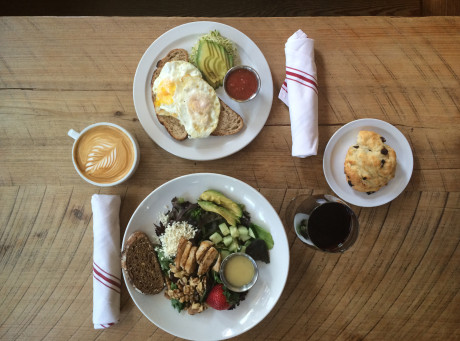